Bringing together a distinguished and diverse group of experts, the Keough School’s Washington office hosted the policy forum “Unity on Global Fragility: Can Today’s Momentum in Washington Stop Tomorrow’s Violent Conflicts?” on July 18, 2019.

Fifteen speakers explored how the US government, academia, civil society, and nongovernmental organizations can work together to prevent violent conflict and build sustainable peace in the most vulnerable parts of the world.

“Global fragility—and all that this concept contemplates and represents—fits squarely within the scope of Notre Dame’s scholarship as well as the Keough School’s mission to counter threats to dignity and human flourishing,” said Scott Appleby, Marilyn Keough Dean, in his opening address. “A holistic understanding of human dignity is central to conflict prevention and peacebuilding work.” 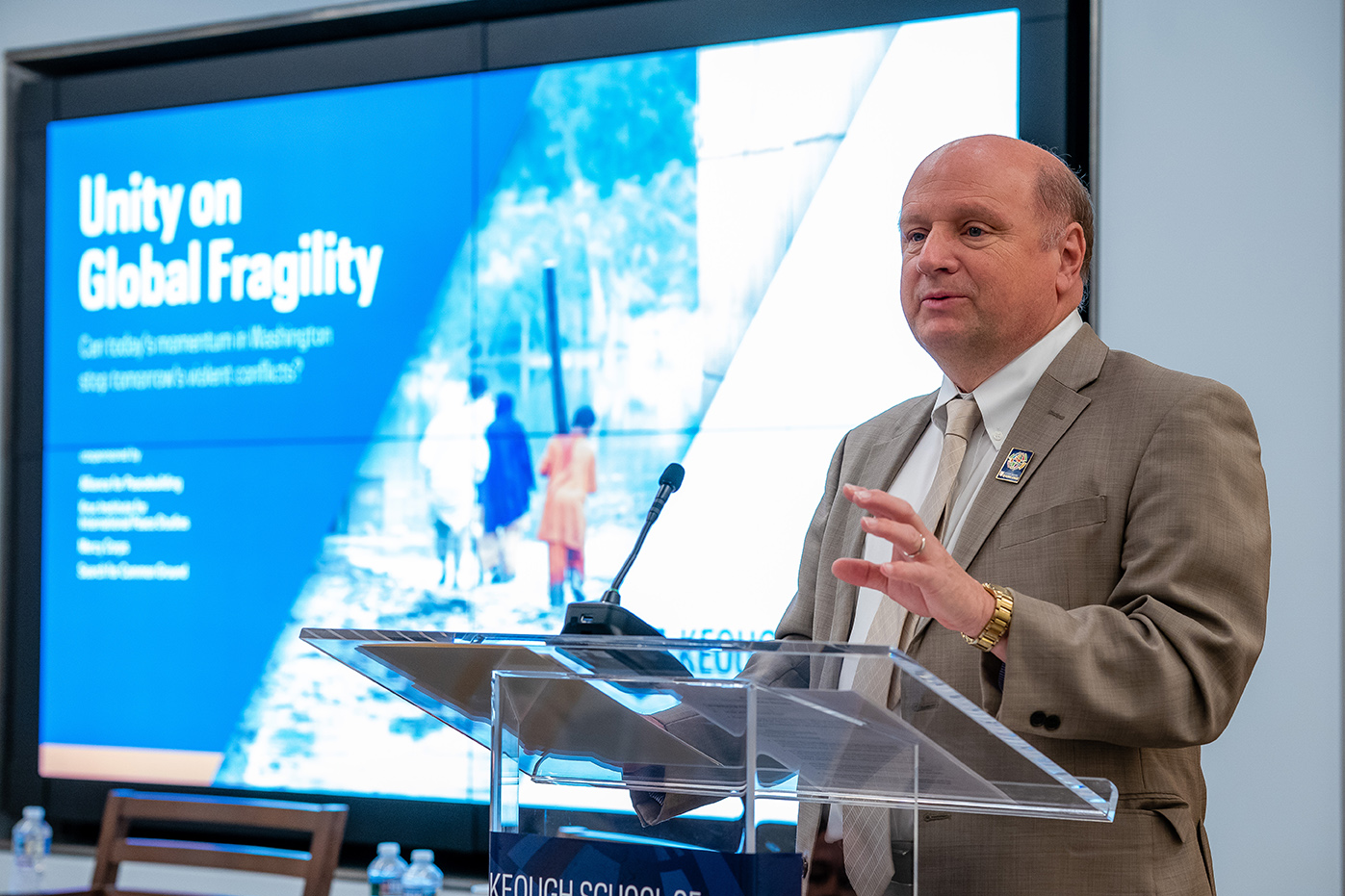 The half-day forum focused on pending bipartisan legislation, the Global Fragility Act, which would require the US government—in collaboration with civil society—to develop a 10-year strategy to enhance stability and reduce violence and fragility worldwide.

US Senators Chris Coons of Delaware (below, left) and Todd Young of Indiana, lead sponsors of the Global Fragility Act, highlighted their belief that the bill proposes an effective way to protect national security without costly and dangerous deployments of US military personnel. The senators emphasized the bipartisan support for their legislation, but asserted that significant work is still needed to overcome objections of their US Senate colleagues who do not support any expansion of foreign assistance. 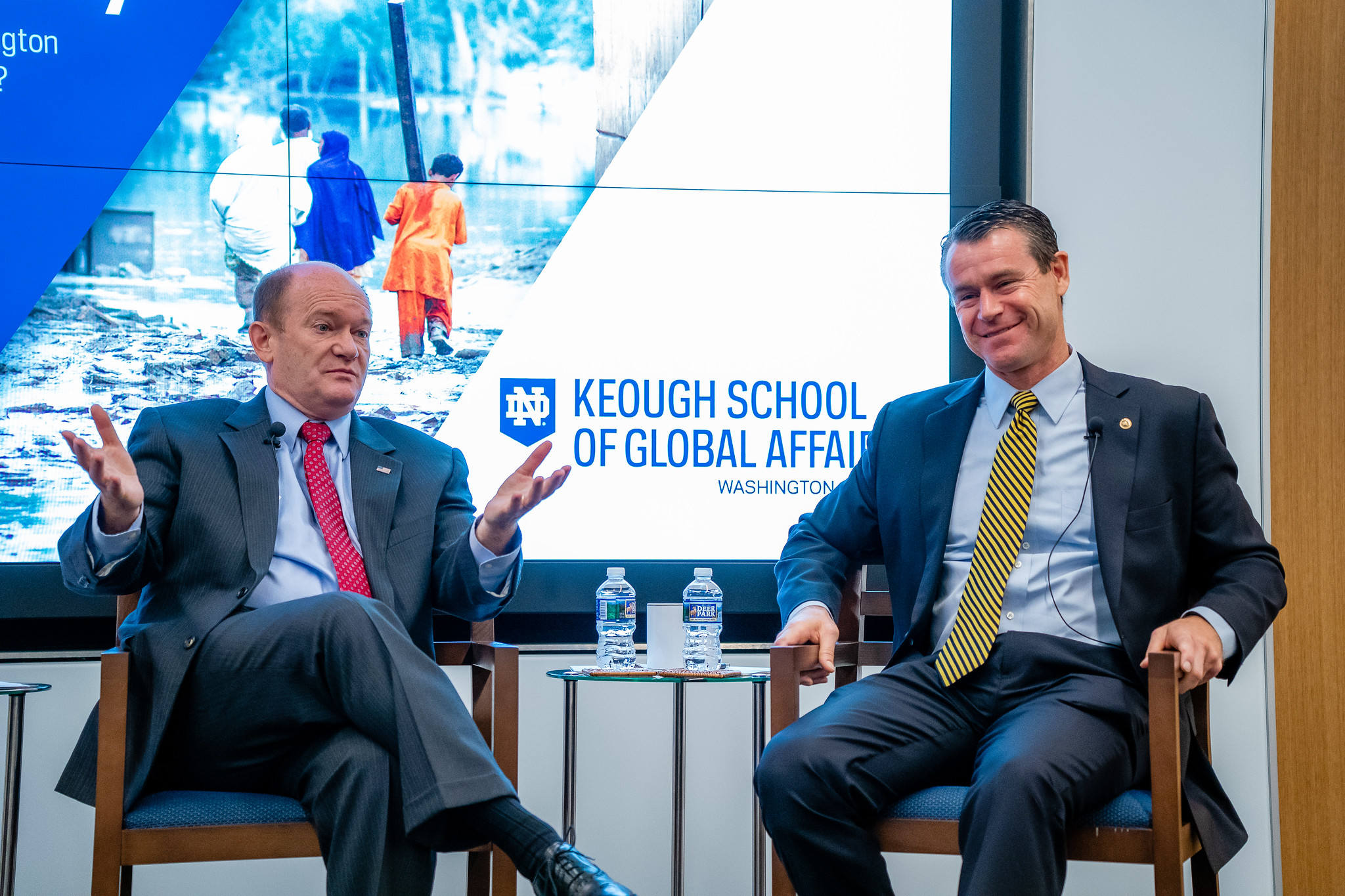 US Assistant Secretary of State Denise Natali, who leads stabilization initiatives on behalf of the US Department of State, outlined how the agency is growing its capacity to recognize early warning indicators of conflict and identify root causes. She also explained the State Department’s efforts to design programs that create resiliency and integrate the work of global partners who share a commitment to peacebuilding and conflict prevention. 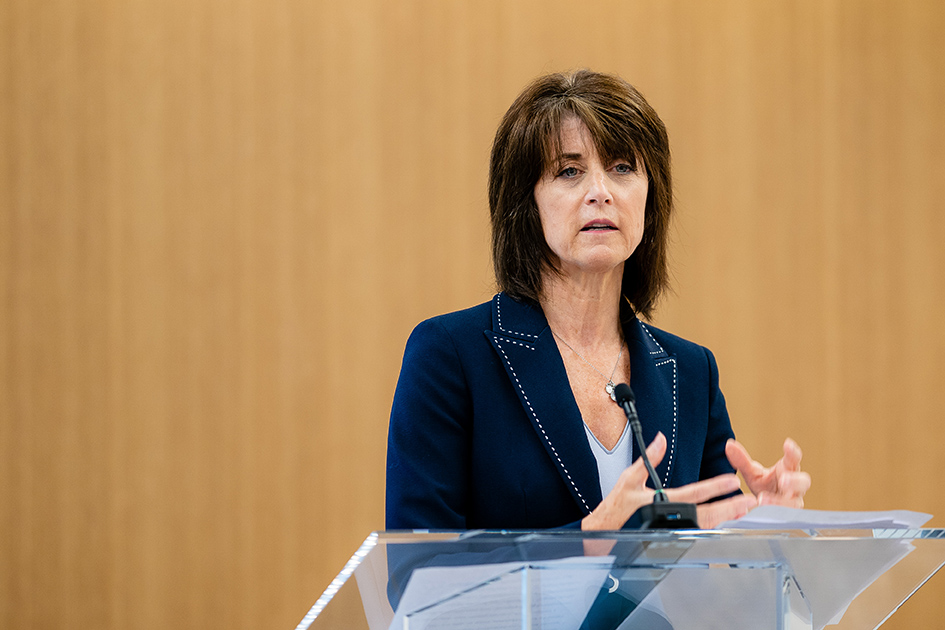 In subsequent panels, senior officials from the US State Department, the US Agency for International Development, and the US Department of Defense addressed their respective agencies’ approaches to preventing conflict and facilitating sustainable peace. They noted that significant progress on prevention is already being made in each department and agency, but that these efforts require more strategic coordination. 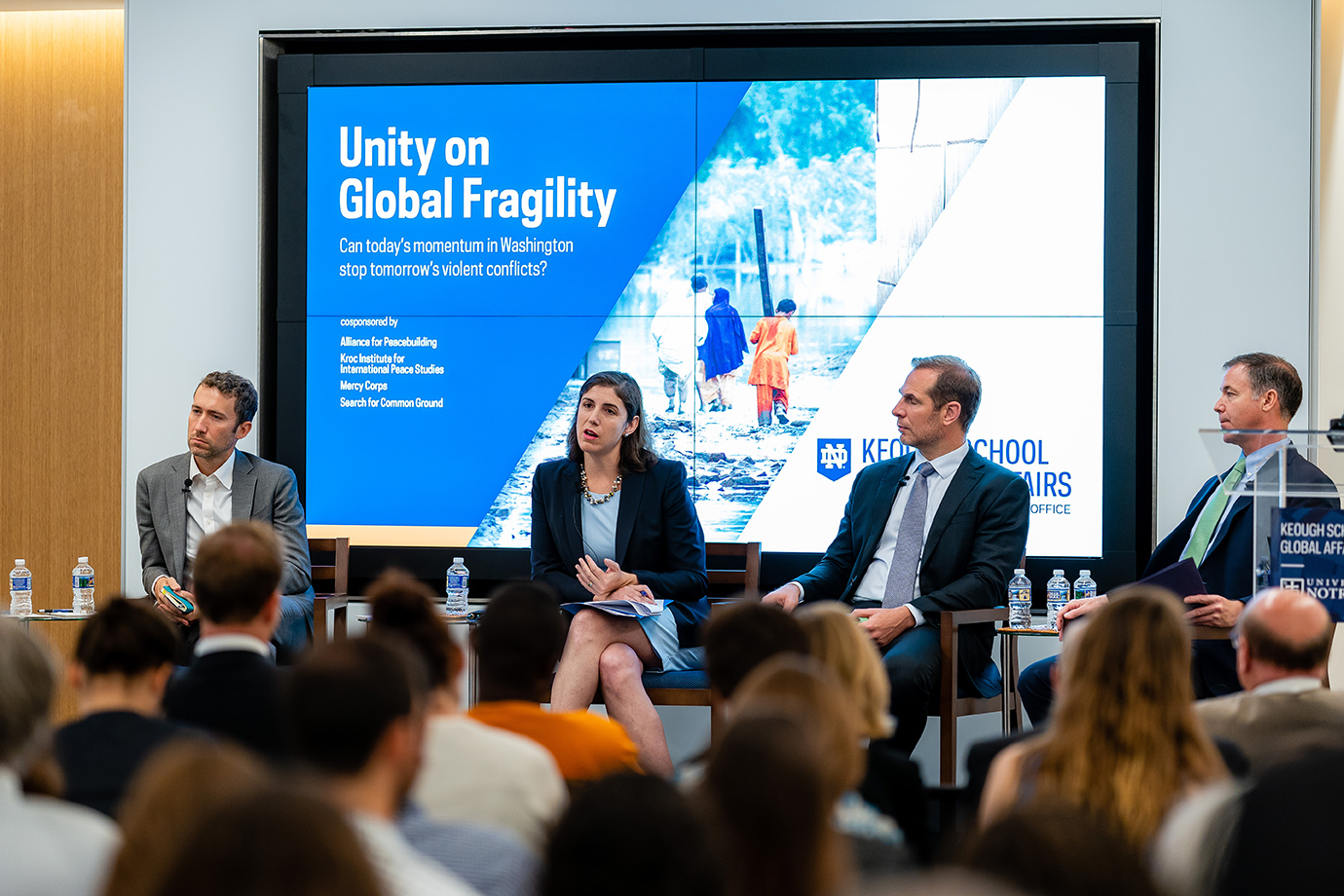 Leaders from Mercy Corps, Search for Common Ground and Nuru International also shared their expertise and experiences operating peacebuilding programs in some of the world’s most conflict-ridden nations. They shared examples of identifying early warning signs of violence and engaging communities in constructive efforts to prevent escalation.

Nancy Lindborg, president and CEO of the US Institute of Peace, argued that success will require changing how government and partner money is allocated and shifting to a country-led rather than Washington or donor-led process. 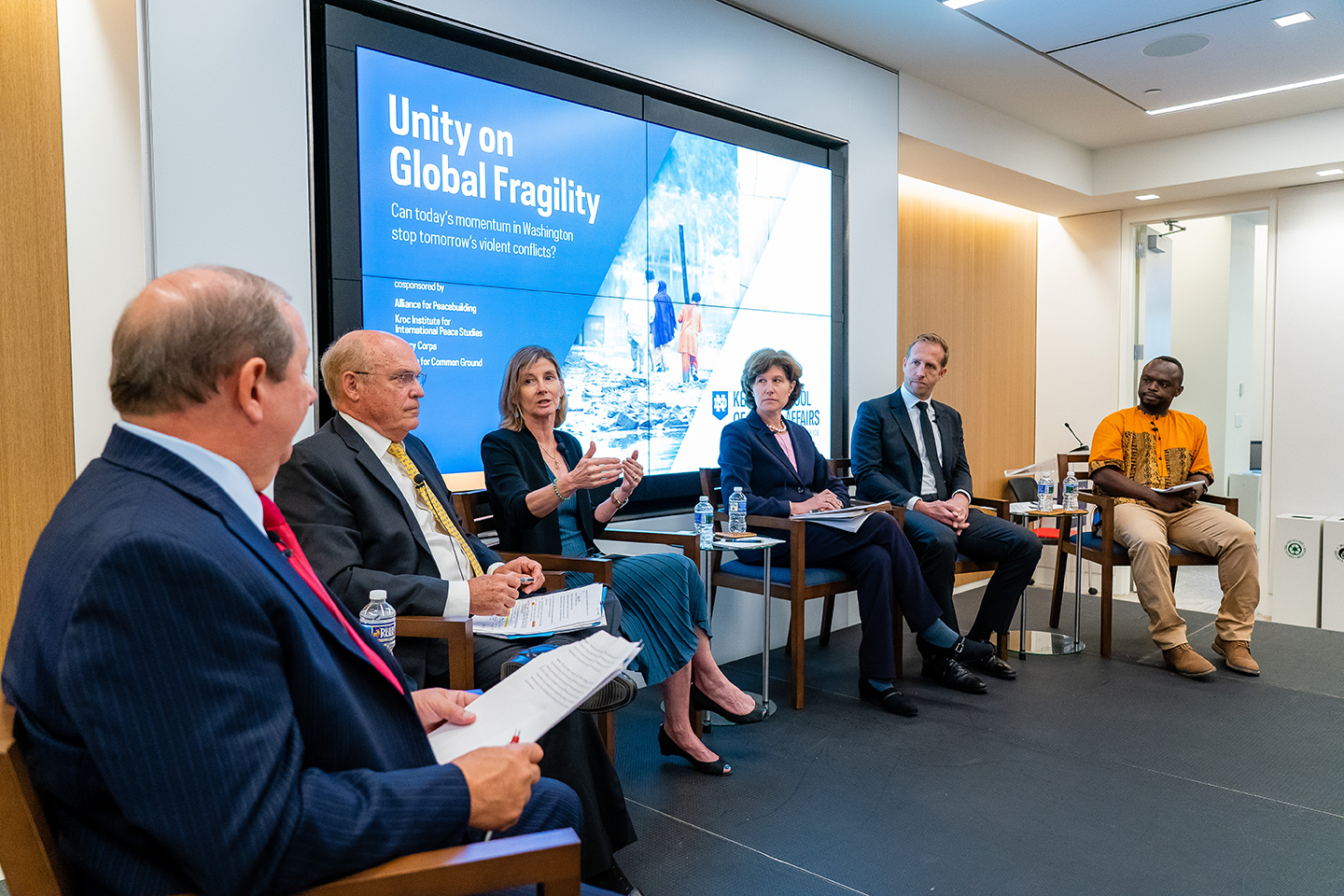 Together, speakers and attendees tackled questions such as:

“If global fragility legislation becomes law, how can the State Department and the Pentagon implement it effectively?”

“What would be evidenced-based measurements of success and how can Congress conduct meaningful oversight to ensure new global fragility programs meet their goals?”

“What roles can civil society organizations and peacebuilding experts play in monitoring and evaluating new stabilization initiatives of the US government? How do they get a seat at the table?”

“How can a new global fragility initiative within the US government outlast changing presidential administrations and congressional elections?”

The forum concluded with widespread agreement that there is significant momentum among stakeholders to improve conflict prevention and peacebuilding, but that it will require “all hands on deck” to turn that energy into meaningful change. Appleby affirmed that the Keough School can be counted among those committed to creating such change and that conflict prevention and peacebuilding are central areas of study, research and policy engagement at the school.

The forum was co-hosted by Notre Dame’s Kroc Institute for International Peace Studies, the Alliance for Peacebuilding, Mercy Corps, and Search for Common Ground.