Torture and Forgiveness at Guantánamo Bay

On January 28, 2018, the Center for Civil and Human Rights, part of the Keough School of Global Affairs, hosted a conversation with Mohamedou Ould Slahi, author of Guantánamo Diary: Restored Edition. Slahi joined 300 students, faculty, and community members in Leighton Concert Hall via teleconference from his native Mauritania.

Joining the panelists onstage were Joshua Pine, Notre Dame junior; Alyssa Paylor, a member of the Keough School of Global Affairs’ inaugural Master of Global Affairs class; and Monalisa and Salvador Leyva, both students in the LL.M. Program in International Human Rights Law. 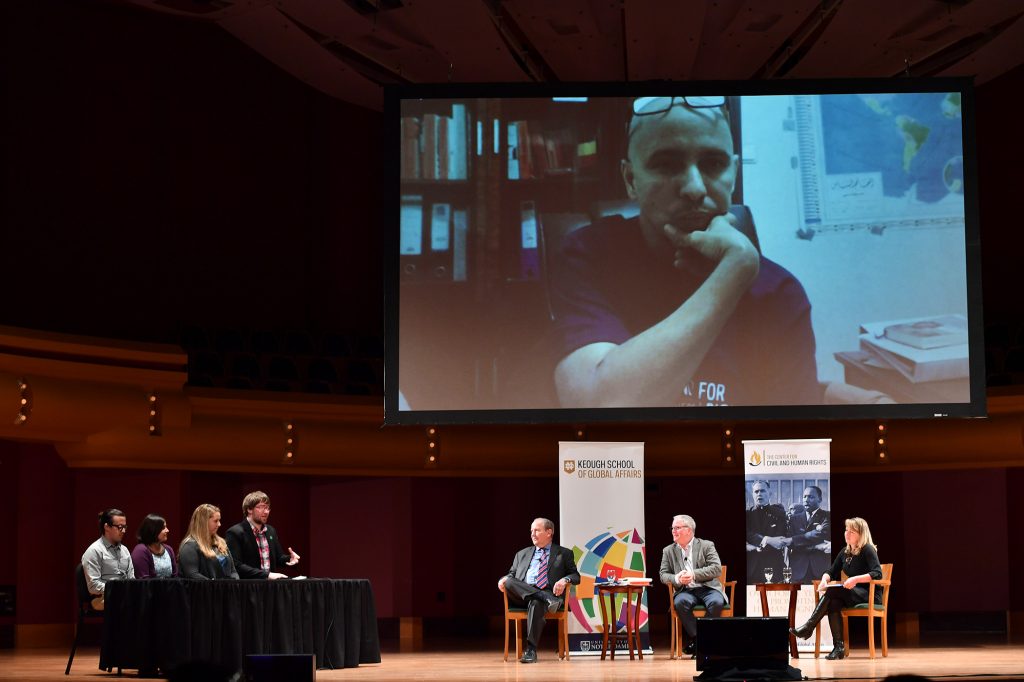 Occasioned by the publication of a new, uncensored edition of his memoir, Slahi was invited to speak to the Notre Dame community about his 14-year detention at Guantánamo Bay, his release without charges, and the role of faith that led him to an eventual forgiveness of those who detained and tortured him. As Scott Appleby, Dean of the Keough School of Global Affairs, pointed out in his introductory remarks, Slahi’s story brought into sharp focus issues of extrajudicial punishment, human rights, the rule of law, and national security.

“It’s a tricky business, it turns out, to describe someone’s life when almost everything we talk about shouldn’t have been part of that life at all.” 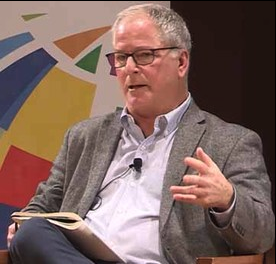 Slahi’s narrative also served as a warning of the dangers of institutionalized dehumanization. As Siems, introducing Slahi, reflected, “It’s a tricky business, it turns out, to describe someone’s life when almost everything we talk about shouldn’t have been part of that life at all.“When everything we know, and everything we’re describing, comes not from the natural course of that life, but from its complete and unjustifiable interruption.” Ultimately, Siems suggested, Slahi’s story is about stealing years from a life, for no legitimate reason and with no apology.

Asked to reflect upon the process of writing this story, Slahi framed it as an act of both resistance and hope, an act born of faith in democratic processes that he saw as abandoned at Guantánamo Bay. “This is a policy of the government: that after 9/11, democracy does not work,” he said. “What I saw in Guantánamo Bay was a dictatorship. I wanted an arbiter, but I didn’t have one. So I used the whole world as my arbiter.” Further, Slahi told the audience, relating his experience in an accurate way was an act of resistance against his captors. “Truth is a very powerful weapon, and truth is a weapon that I have in my arsenal that the government does not have… the government cannot know more than I do about myself.”

On his path to forgiveness, Slahi was clear that arriving at that point was a process that required thought, meditation, and prayer. At first intent upon revenge for the injustices visited upon him, he came to understand the emptiness of such measures. “In time it was like enlightenment in my head,” he explained. “I have everything, but I couldn’t see it. I found out that no revenge is as compete as forgiveness.” He also made clear that his act of forgiveness was an act of self-preservation, a way to maintain human dignity. “I do it for myself,” he said, “not for anyone else.”

“I found out that no revenge is as compete as forgiveness.”

Carefully balancing Slahi’s remarkable capacity for forgiveness, Juan Méndez offered a reminder that forgiveness is a personal act, not an institutional one. Mohamedou’s act of forgiveness does not free the U.S. from its obligation to tell the truth about the global war on terror, Méndez said. The state cannot forgive on behalf of victims. “The state can and must expropriate revenge, but it cannot expropriate forgiveness,” he insisted. “When a state decides not to investigate, not to publicize, not to prosecute, and not to punish, it is actually expropriating forgiveness from the only persons who can really forgive, the victims.”

“When a state decides not to investigate, not to publicize, not to prosecute, and not to punish, it is actually expropriating forgiveness from the only persons who can really forgive, the victims.” 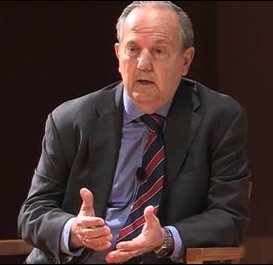 In final remarks, Slahi spoke to an issue central to both his survival of inhumane treatment and the forgiveness that he eventually found. “Faith grows with a person,” Slahi said. “When I was a child, I saw God as Aladdin and his magic lamp. I ask for something, and it happens like that. I grew up to understand that the universe is much more complicated than that…God is always beside you, but God is not Aladdin, you have to flow with the universe and with nature.”

“Torture and Forgiveness at Guantánamo Bay” became a campus-wide experience through partnership with many Notre Dame departments and organizations. Mendez and Siems spoke to students in the Keough School of Global Affairs policy seminar, while the Center for Social Concerns held discussion groups prior to the event for those interested in exploring the themes of the book. Programs across campus also contributed to the event by distributing copies of Slahi’s memoir to students in the weeks preceding the event.

Of special note was the involvement of Profs. Anton Juan and Anne Garcia-Romero of the Department of Film, Television, and Theatre, who integrated Guantánamo Diary into their spring 2018 course, “Devised Performance: Transferring Memory, History and Document into Theatrical Expression.” In conjunction with the teleconference, they staged “Transferring Guantánamo” in the Philbin Studio Theatre, a deeply moving interpretation of passages from the book that brought Slahi’s words to life.