How to Evaluate People’s Perception of Peace Agreement Implementation

The Peace Agreement signed between the Government of Colombia and the Armed Revolutionary Forces of Colombia (FARC-EP) in November 2016 has been recognized as one of the most comprehensive peace agreements signed following civil conflict. According to the Kroc Institute for International Peace Studies, as of November 2020, 28 percent of the Agreement’s commitments were fully implemented and an additional 18 percent had an intermediate level of implementation, which overall is considered good progress, compared to implementation rates of other Comprehensive Peace Agreements. Despite the high levels of implementation, a survey conducted by the United Nations Development Program (UNDP) and the Peace Research Institute of Oslo (PRIO) showed that 58 percent of people living in the sixteen regions prioritized for the implementation of the Agreement (“PDET regions”) were dissatisfied with the Agreement’s implementation process. These levels of dissatisfaction are surprising considering that, in addition to the overall high rate of implementation of disarmament, demobilization and reintegration measures, PDET regions are where a large number of the Peace Agreement commitments are concentrated. However, as illustrated by the UNDP/PRIO survey, this progress does not seem to directly translate into higher levels of satisfaction.

This divergence between implementation rates and people’s perceptions can be explained by two facts. First, people’s ideas of peace are not equivalent to the Agreement’s measurement of success. And second, evaluations of successful implementation tend to focus on conflict-related violence termination but not necessarily on the conditions that allow for structural violence, which significantly impacts people’s experience in post-accord contexts. 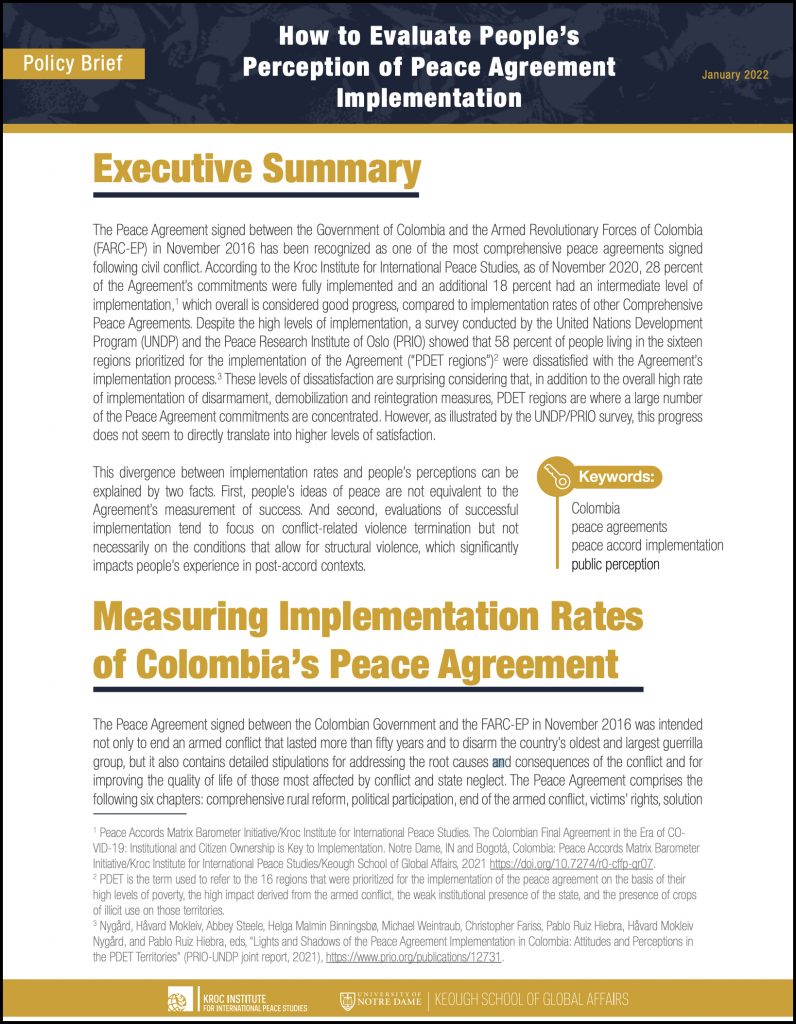 Read this brief at curate.nd.edu