Home › Publications › Estimating the Effect of Christian Messages on Civic Engagement: Evidence from a Community-Collaborative Study in Zambia

Estimating the Effect of Christian Messages on Civic Engagement: Evidence from a Community-Collaborative Study in Zambia

A significant literature suggests that religious conviction can drive political participation, perhaps because religious people internalize a moral obligation to act toward the common good and/or because religious conviction gives people a sense that their actions will make a difference. This paper presents findings from a community-collaborative pilot study in Zambia that examines these ideas. Zambia is an overwhelmingly Christian state experiencing dramatic democratic backsliding. Zambian churches are among the major providers of civic engagement education and programming. Together with our community partners, we randomly assigned Zambian youth (aged 18-35) volunteers into one-time civic engagement workshops. Identical basic civic educational material was presented in each workshop. Yet, we ended this curriculum with two different sets of pre-recorded Christian motivational messages: In 50% of the workshops, these messages emphasized a religious obligation to sacrifice for the common good. In the other 50%, the messages emphasized the power of faith to make change in the world. We found that the latter message (emphasizing the power of faith) moved workshop participants to be more willing to participate in peaceful protest, to disavow political violence, and to critically evaluate other people who choose not to participate in electoral politics. By contrast, the message focused on sacrifice for the common good did not affect political participation relative to baseline. We discuss how the study advances research on religion and political participation as well as knowledge about Christian civic education programs, which are prevalent but understudied throughout. 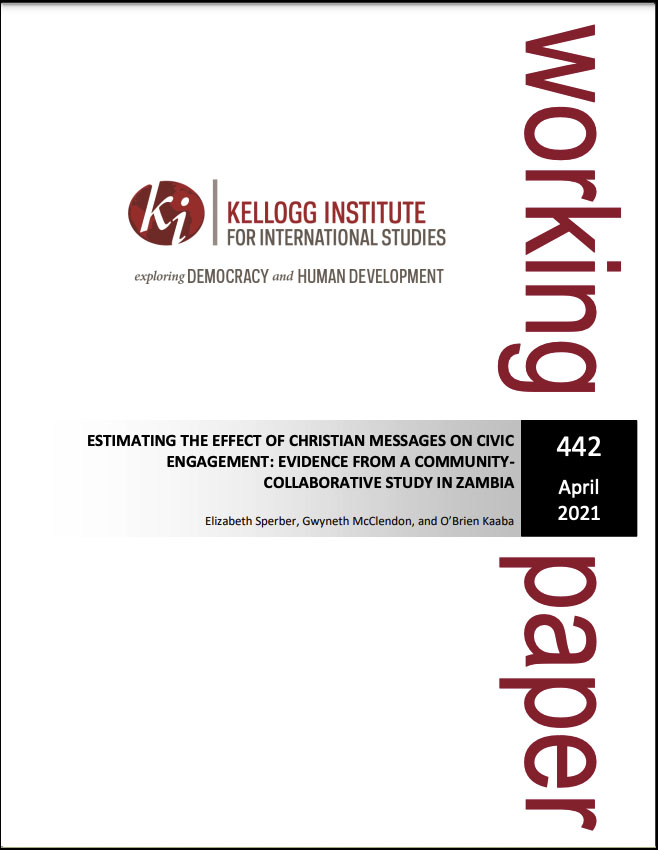