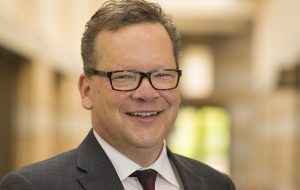 Donahue is professor of European studies; the Rev. John J. Cavanaugh, C.S.C., Professor of the Humanities; and professor of German at the University of Notre Dame. A scholar of contemporary German literature and film, Donahue is a concurrent professor of  Film, Television, and Theatre. He is the author of Holocaust as Fiction: Bernhard Schlink’s  “Nazi” Novels and Their Films and The End of Modernism: Elias Canetti’s Auto-da-Fé. He has served as chair of Notre Dame’s Department of German and Russian Languages and Literatures.

Donahue is co-director of the Notre Dame Berlin Seminar, which brings American scholars of German literary and cultural studies together with experts and leading figures of Germany’s literary scene. He holds a PhD in German Literature from Harvard.