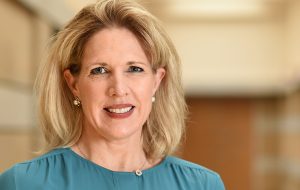 Maura Policelli is executive director of the Keough School’s office in Washington, DC. She provides strategic direction for the office, including its programming and outreach.

Before coming to Notre Dame, Policelli was chief of staff for Oxfam America. She has extensive experience in national politics, public policy, and communications, and has spent nearly twenty years working in Washington on and off Capitol Hill.

In the US House of Representatives, Policelli launched a program for new members of Congress on behalf of Democratic Leader Richard Gephardt. This position involved guiding 78 new members in establishing their Washington and district offices. She also assisted members in identifying legislative, media and constituent outreach objectives.

Policelli later served as chief of staff for Congresswoman Jane Harman who, as the ranking member of the House Intelligence Committee, led efforts on Capitol Hill to respond to the terrorist attacks of 9/11.

As chief of staff for Congresswoman Gabrielle Giffords, Policelli developed and implemented strategies to establish Giffords as a leader on solar energy and immigration reform.

Policelli also has worked at the Center for American Progress and the Center on Budget and Policy Priorities, where she implemented new policy initiatives, led issue campaigns, and directed media operations.

In the Obama Administration, Policelli was first appointed to the US Department of Education as senior advisor to the Deputy Secretary. She later served as the senior vice president of communications at the Export-Import Bank of the United States.

Policelli has served as an adjunct professor for Boston University’s Washington, DC political science program. She holds a JD from Georgetown University and a BA from the College of the Holy Cross in Massachusetts.