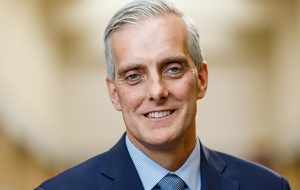 McDonough currently serves as US Secretary of Veteran Affairs. He is not affiliated with the Keough School.

Denis McDonough was professor of the practice of public policy at the Keough School of Global Affairs at the University of Notre Dame from 2017 to January, 2021. He taught courses for master of global affairs and undergraduate students in areas of his expertise, including public policy analysis and formulation, writing for policy, government and nongovernmental organization management and leadership, and selected topics (e.g. migration and refugees, national and international security). He also contributed policy expertise to the Keough School’s Global Policy Initiative and oversaw a new research program, the Presidential Transition Index, to provide an ongoing, near real-time assessment of the 2020 presidential transition.

From February 2013 until January 20, 2017,  McDonough served as White House Chief of Staff for President Barack Obama. In that role, McDonough managed the 4,000-member White House staff, as well as Cabinet Secretaries and agency leaders. He provided strategic advice to the President on the most significant domestic policy, national security, and management issues facing the federal government and enforced plans and accountability for performance and goals, maintaining the Obama Administration’s reputation for effective, ethical operation.

McDonough also planned and coordinated efforts to recruit and retain key talent—including an unprecedented expansion of technology experts, engineers, and content generators within the White House and across the federal government.

Prior to his role as chief of staff, from September 2010 until February 2013, McDonough served as assistant to the president and principal deputy national security advisor. He chaired the National Security Council’s Deputies Committee, leading a multiagency team to address complex national security challenges, including crisis management as well as policy decisions related to the Iran nuclear negotiations, strategic arms reductions talks with Russia, the United States re-balance to Asia, the Afghanistan surge, and the Iraq drawdown. Throughout the 2008 Presidential campaign, McDonough served as senior foreign policy advisor for Obama for America.

Prior to his eight-year tenure in the White House, McDonough served in senior leadership and policy-making positions in the U.S. House of Representatives, as professional staff member on the International Relations Committee, and in the U.S. Senate, for the Senate Majority Leader and for Senator Ken Salazar (Colorado).

McDonough was appointed senior principal at the Markle Foundation in February 2017. In this role, he is working to address the skills gap, particularly in light of the looming artificial intelligence revolution. As part of this work, McDonough chairs the Rework America Task Force, which consists of a panel of influential American who will advance work on enabling all Americans to develop the skills they need to grow their careers and find a new place in the new economy. Through the Task Force, McDonough will work to shape and lead a larger, longer term national conversation about how the technological revolution can serve all stakeholders in the new economy.

News: Democratic and Republican preparations for presidential transition are on track, though challenges lie ahead