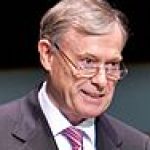 Horst Koehler is an accomplished economist and international statesman. He was President of Germany from 2004-10 and Managing Director of the International Monetary Fund (IMF)  from 2000 – 2004.

Koehler was the eighth Managing Director of the IMF. Shortly after taking office in 2000, he established the Financial Sector Review Group to provide an independent perspective on the IMF’s work on international financial markets. On the group’s recommendations, Koehler created the International Capital Markets Department, a unit to anticipate and head off financial crises in countries to which the fund makes loans. Among his accomplishments were overseeing debt crises in Brazil and Turkey and expanding debt relief for the world’s poorest countries.

Upon his departure from the IMF, Koehler was elected to his first five-year term as President of Germany by the Federal Assembly on 23 May 2004 and was subsequently inaugurated on 1 July 2004. He was re-elected to a second term on 23 May 2009, but resigned a year later.

Following his departure from the Presidency, between 2010 and 2011, Koehler served as member of the Palais Royal Initiative, a group convened by Michel Camdessus, Alexandre Lamfalussy and Tommaso Padoa-Schioppa to reform the international monetary system.

From 2012 to 2013, Koehler served—alongside Ellen Johnson Sirleaf and David Cameron—on the High-level Panel on Post-2015 Development Agenda, an advisory board established by United Nations Secretary-General Ban Ki-moon to develop the global development agenda beyond 2015, the target date for the Millennium Development Goals.

Koehler is an economist by profession. Prior to his time at the IMF and election as President, he had a distinguished career in politics, the civil service and as a banking executive. From 1990-93, he served as Germany’s Deputy Minister of Finance, being responsible for international financial and monetary relations. During this time, he led negotiations on behalf of the German government on the agreement that became the Maastricht treaty on European Economic and Monetary Union. He was also closely involved in the process of German unification, and held the position of Deputy Governor for Germany at the World Bank.

From 1993-98, Koehler served as President of the Association of savings banks in Germany, Deutscher Sparkasse und Giroverband. He was President of the European Bank for Reconstruction and Development, based in London, from 1998-2000.