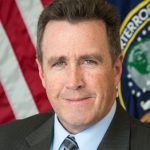 Mulligan was responsible for the NSA’s overall counterterrorism program from August 2011 through February 2015. His role included integrating NSA capabilities with other US government agencies to detect and disrupt terrorist threats around the world.

Mulligan joined the NSA in 1983 as an intelligence research intern. He has served in a variety of roles, including field postings and positions at military commands. NSA Headquarters assignments include service as a senior group coordinator in the National Security Operations Center and management positions within NSA Analysis and Production. From 2005 to 2007, he completed two separate tours in the Middle East.