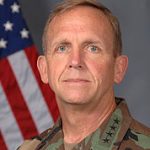 The former head of the United States Special Operations Command, he retired from the United States Navy in 2011 as a full Admiral after 38 years of military service. He serves as a member of International Advisory Board at Garda World Security Corp, and also has been an independent director of Iridium Communications Inc. since December 6, 2011.

As the commander of the US Special Operations Command (USSOCOM), Olson was responsible for the mission readiness of all Army, Navy, Air Force and Marine Corps special operations forces. Prior to that, he led operational units within every component of the Naval Special Warfare community and served in senior positions within USSOCOM and the US Navy staff.

Olson qualified as a Naval Special Warfare officer (“Navy SEAL”) in 1974. He has been awarded the Defense Distinguished Service Medal and the Silver Star. He earned a Master of Arts degree in national security affairs at the Naval Postgraduate School, and graduated from the United States Naval Academy in 1973.

Olson was a featured speaker in 2019 at the University of Notre Dame’s Keough School of Global Affairs where he met with master of global affairs students as part of the policy curriculum.