Before Mahan Mirza, executive director of the Ansari Institute within the Keough School of Global Affairs, took off for Oman with eight Notre Dame students for the spring break course “Holy Cross-roads: Religion and Politics from South Bend to South Asia,” he checked in with the University to ensure that travel was still safe and approved. It was weeks before the virus started ravaging parts of the US and the US Department of State’s  advisory against international travel. While waiting in line to board their plane, members of the group started getting messages about Harvard and Georgetown converting to online courses for the rest of the spring semester but Notre Dame officials had not yet decided to go virtual.

Feeling assured that they would be safe in Oman—listed as a level-one country, the State Department’s safest designation — the group pressed on in hopes of furthering intercultural and interreligious dialogue along with eight students from Notre Dame University Bangladesh (a separate institution also affiliated with the Congregation of Holy Cross). The 16 students, along with Mirza, instructor Jason Klocek and Notre Dame University Bangladesh President Rev. Patrick Gaffney, C.S.C., visited culturally significant sites, met with local faith leaders and even learned about Omani cuisine.

“Every activity we did in Oman—from swimming and hiking to touring the Grand Mosque and the College of Shari’a—was well worth the time,” said sophomore Annie Foley from Wilmette, Illinois, who said the trip was one of the best experiences of her life. “Each activity allowed us to build trust and accountability among each other, which are important prerequisites for any constructive discussion. Our dialogue sessions were all the more meaningful because we had already established a baseline of respect among one another in these activities.”

As the course continued, the group remained dialed into what was happening in the States, and particularly on campus.

“We went, things were fine and around mid-week we started getting messages from Notre Dame about how classes would be canceled after spring break,” Mirza said. “Students’ anxieties rose and we wanted to make sure we were taking care of them physically and psychologically. Then the students were asking if they’d be able to go back to campus to get their things or if they should just fly home from O’Hare, where we were going to land.”

After confirmation from the Notre Dame International team that students would be allowed to briefly enter their dorms to pick up all essential items, the question remained:  Where would they stay until they could rebook flights home? Mirza quickly phoned his wife to ask what she thought of hosting the students at their off-campus inn. An interfaith group had been staying there that week, but they were preparing to depart.

“I told them that anyone who needed to stay could stay and five of the students took us up on our offer,” he said.

All eight of the students came for dinner at the inn, which was a sort of continuation of the Oman trip, Mirza said. As students worked to change their travel plans, the group started talking about all the events that would be canceled due to the outbreak of coronavirus. Commencement was at the top of senior Elizabeth Boyle’s mind. She feared she wouldn’t get the chance to walk in her cap and gown.

With a few musicians on hand—including Mirza on harmonica and a student on ukulele—the group conducted what they dubbed a “faux-mencement,” playing Pomp and Circumstance for Boyle and giving speeches. Notre Dame ultimately decided to do an online commencement this year in light of the coronavirus outbreak, so the “faux-mencement” was, indeed, Boyle’s only chance to have a ceremony near campus this year. Notre Dame President Rev. John I. Jenkins, C.S.C., invited 2020 graduates to celebrate on campus next spring.

“It was just so sweet,” said Boyle, a native of Manhasset, NY who plans to pursue a career in religious dialogue and peacebuilding. “We were all smiling and laughing and it just made everything that was going on less scary. It was something special that I’m going to hold with me for a long time.”

The time at the Mirza’s inn was memorable for Foley, too. She saw it as a chance to debrief on all they had learned during their time in Oman.

“They were incredibly generous in welcoming our group to their inn for one last gathering before we all departed ways,” Foley said. “It was really special to have a place to celebrate the trip and all the wonderful experiences we shared.”

When Julia French traveled to Oman as part of a Keough School class on global religion and politics, she quickly dove into challenging conversations.

The University of Notre Dame sophomore from Raleigh, NC, heard from Bangladeshi students who worried that Rohingya refugees were taking too many resources from their country, one of the world’s poorest. It was a perspective French hadn’t encountered in reading media coverage of the larger humanitarian crisis.

She also heard from an Ibadi Muslim sheikh, who argued women are like diamonds that should be put in a box and locked away to protect them from the dangers of the world—a statement that stunned her and later prompted a rebuttal from Bangladeshi students as well as larger conversations about gender inequality in Christianity and Islam.

The week was a heady mix of such thought-provoking and sometimes uncomfortable conversations, as French and her fellow Notre Dame students worked to understand others, move beyond a “single story” conception of the world, and build dialogue across religions and cultures. 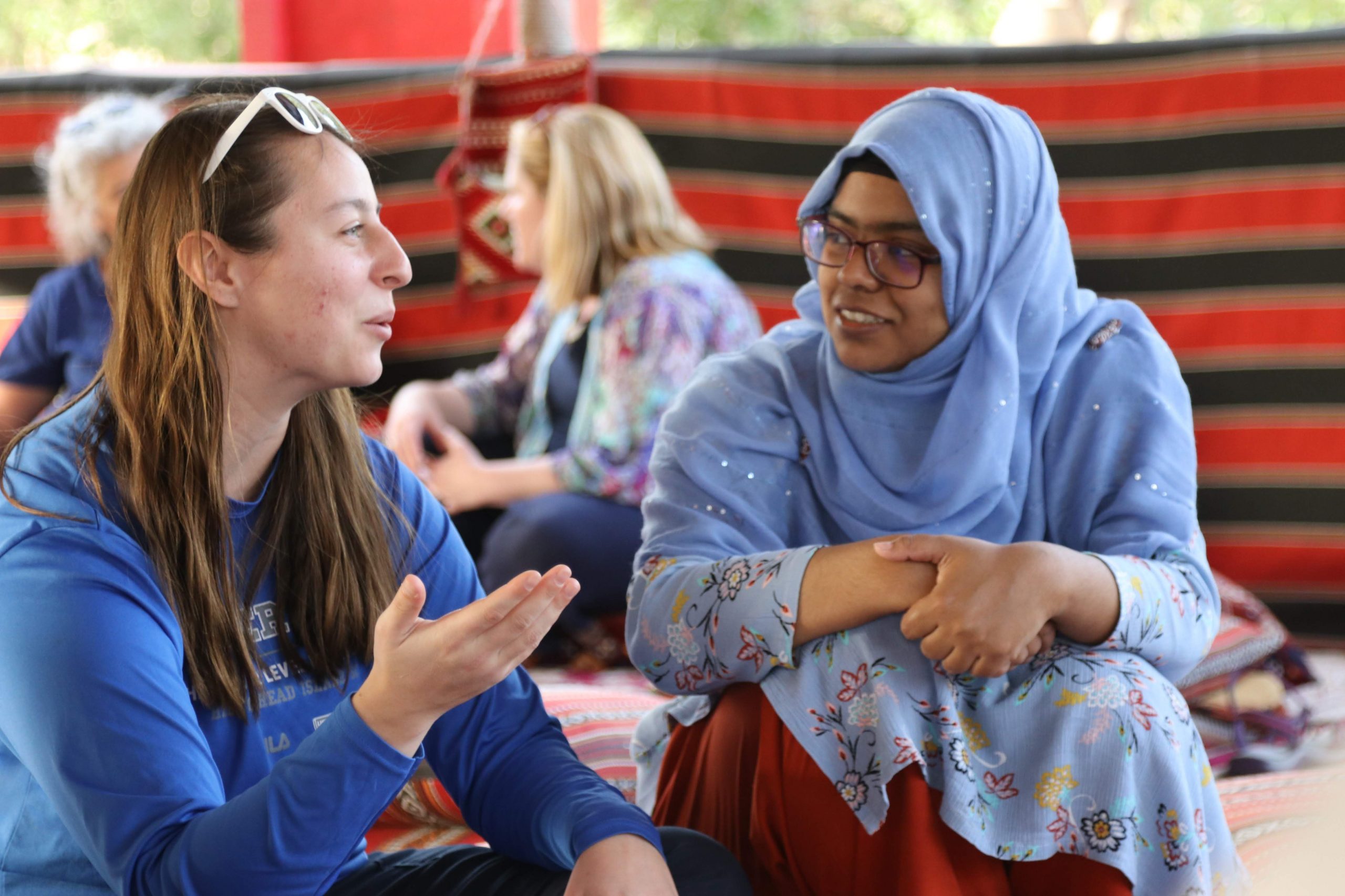 “A big part of this trip for me was learning how much I don’t know, and the limits of my own knowledge,” French said, recalling the conversation on Rohingya refugees. “Hearing a peer talk this way about something forces you to think, if I was born in a different country, maybe I would think about things differently. And encountering Omani women and Bangladeshis, who were coming from different places, showed me how the world is seen with different eyes by everyone, and how everyone brings their own perspectives.”

The trip was part of “Holy Cross-roads: Religion and Politics from South Bend to South Asia,” a class offered in conjunction with the Ansari Institute for Global Engagement with Religion at Notre Dame’s Keough School of Global Affairs. French was among eight Notre Dame students who traveled to Oman to meet with eight other students from Notre Dame University Bangladesh. 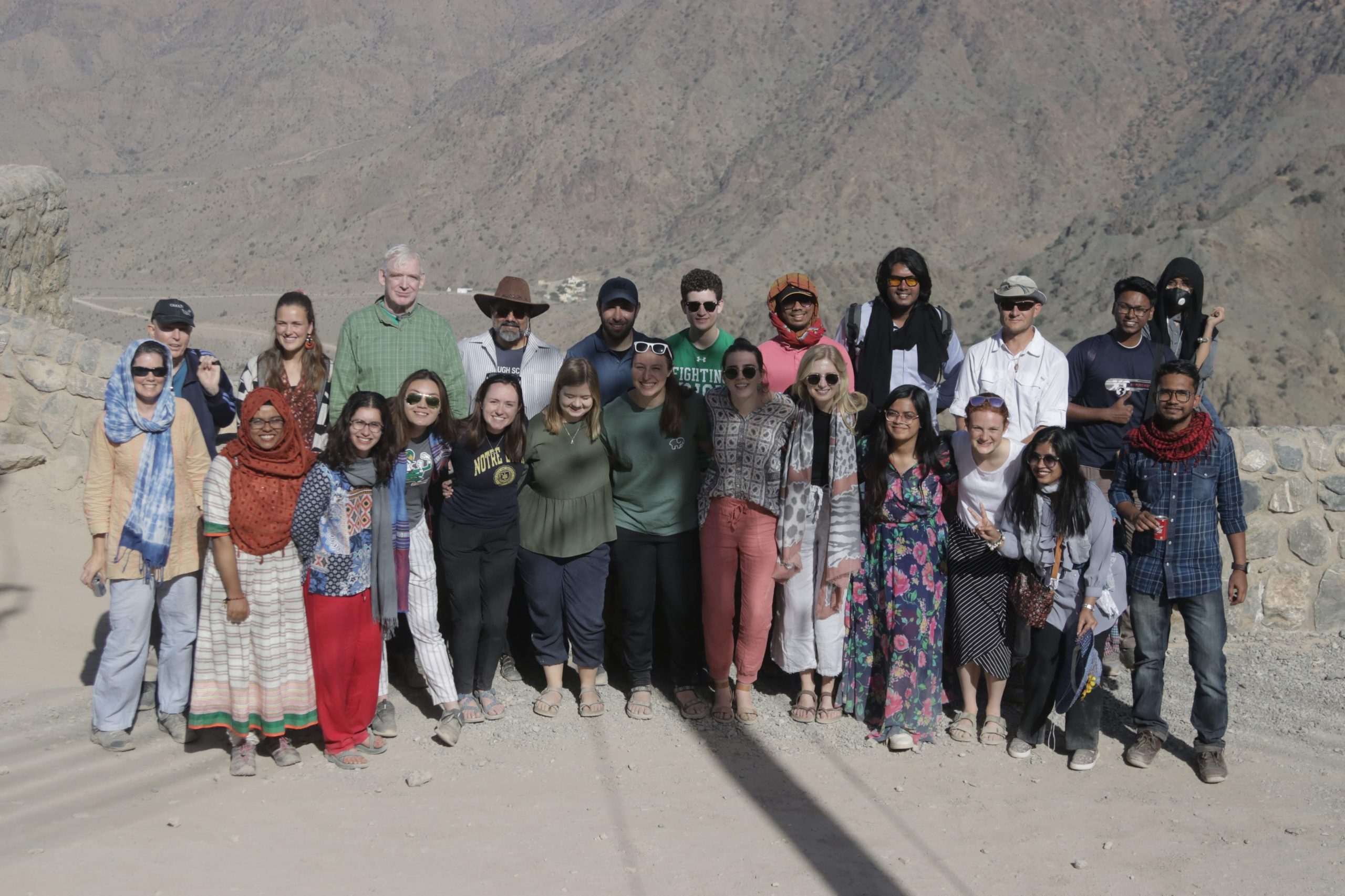 Together with their instructors, students visited culturally significant sites, met with local faith leaders, and spent time in conversations that challenged them to understand others’ perspectives while articulating their own, said Mahan Mirza, the Ansari Institute’s executive director.

“The Ansari Institute is committed to providing transformative learning opportunities for students, and the world is our classroom,” Mirza said. “For a course that connects students from two great Holy Cross institutions, Notre Dame in South Bend and Notre Dame in Bangladesh, Oman was the perfect place for us to meet. Situated at the crossroads between Africa and South Asia, Oman is a Muslim-majority Arab country that is neither Shia nor Sunni. Our home at Al Amana Centre in the foothills of Muscat provided the right balance between familiarity and unfamiliarity for exactly the kind of engagement we were hoping for.”

And that engagement was wide-ranging for the group, which included course instructor Jason Klocek, a postdoctoral research associate at Notre Dame, as well as Rev. Patrick Gaffney, C.S.C., president of Notre Dame University Bangladesh. Together, participants took a cooking class that introduced them to Omani cuisine, explored Ibadi architecture and marveled at the beauty of the Sultan Qaboos Grand Mosque. They explored a national monument—an old fort where imams and administrators had once presided. And they visited Catholic and Protestant churches as well as a Hindu temple, learning about the lengths and limits of Oman’s religious pluralism. 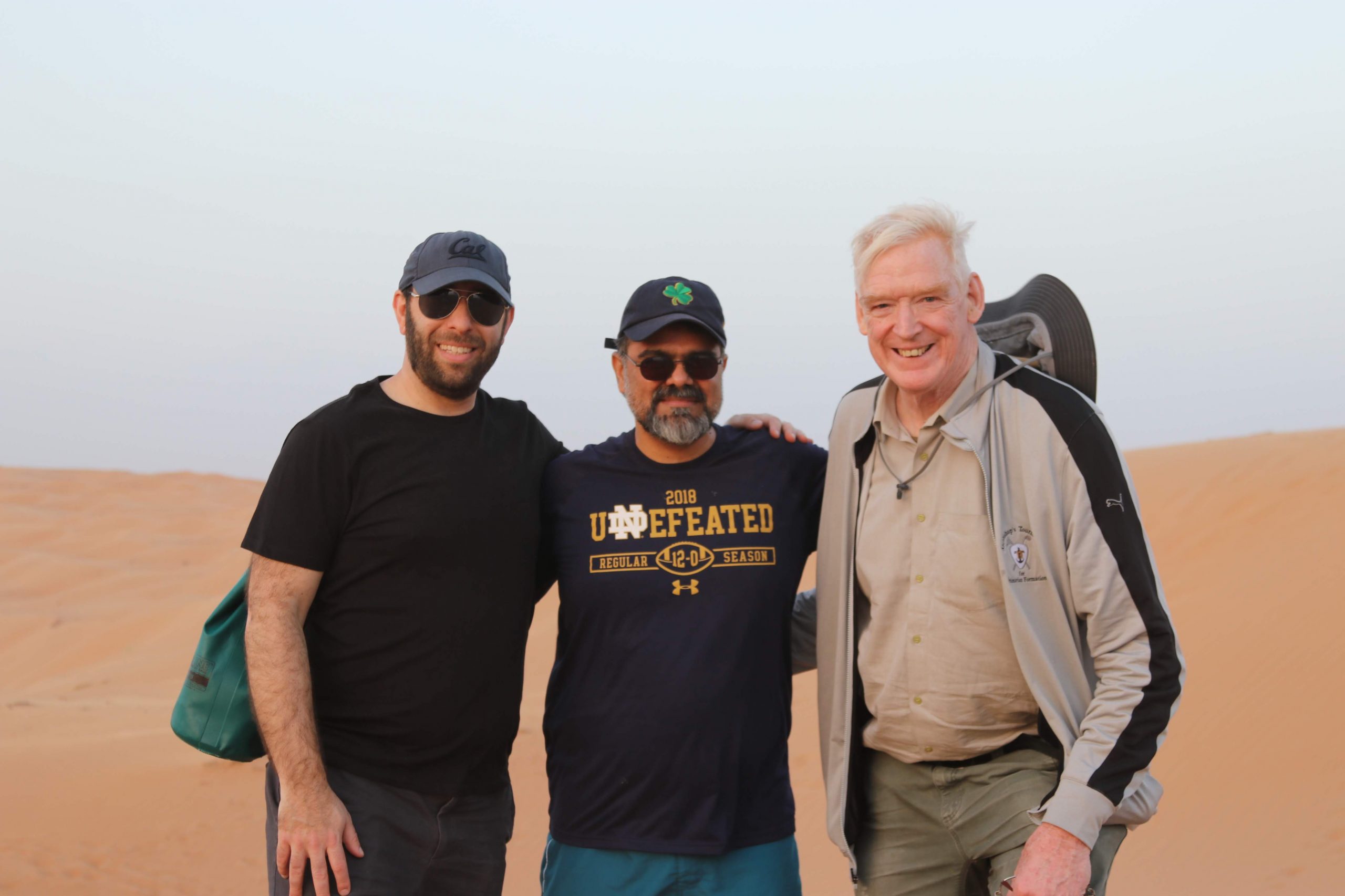 “Ultimately, the week in Oman was as much about developing new questions as finding solutions to pressing global challenges related to migration, development, political repression, and religious violence,” Klocek said. “It was also an active response to Pope Francis’ call for us to ‘step outside’ ourselves and fearlessly encounter those ‘who think differently, as well as those who hold other beliefs, who do not have the same faith.’”

Elizabeth Boyle, a senior from Manhasset, NY, who plans to pursue a career in religious dialogue and peacebuilding, experienced the trip as a satisfying culmination of her studies at Notre Dame.

As an undergraduate, Boyle had earlier traveled to Nepal and Qatar in connection with Notre Dame’s Madrasa Discourses Project, which equips Islamic religious leaders with tools to engage pluralism, modern science, technological advances, and new philosophies. She had received research grants to study scriptural reasoning at Oxford University and Cambridge University, and had traveled to Rome and Ireland to conduct interviews on the underappreciated role of Catholic women in peacebuilding. 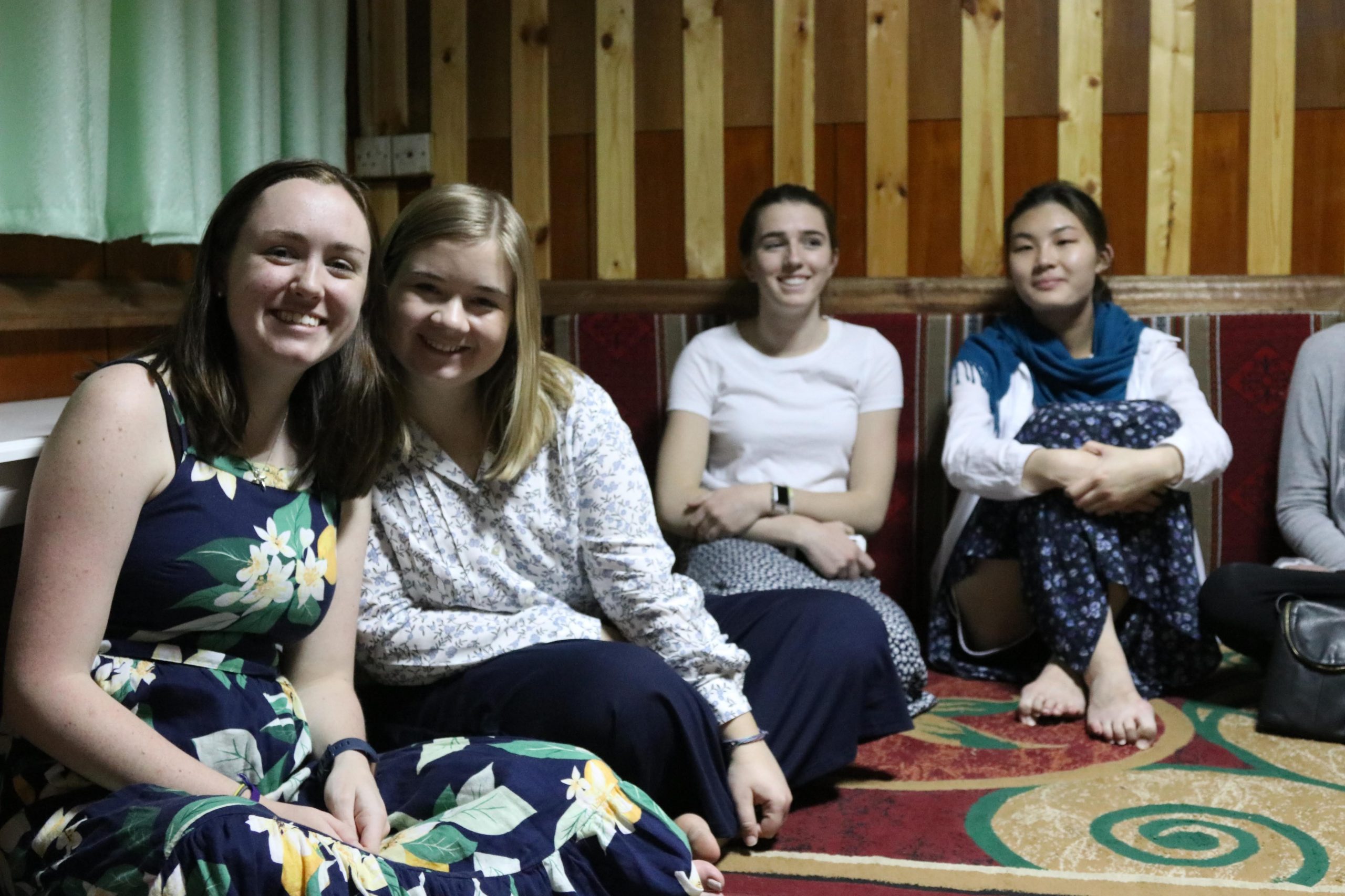 On this latest trip, Boyle said, she once again witnessed the power of dialogue to broaden perspectives and build bridges.

“One of the greatest gifts that I was able to take away from this experience was to watch other people experience this dialogue for the first time,” she said. “It’ll never grow old and I’ll never grow tired of seeing this happen.

The experience reinforced her desire to work for peace, and to appreciate the role that honest and respectful conversations play in helping people understand and trust each other as they navigate real differences and design constructive policies.

“I’ve never seen any school facilitate such a genuine engagement with different cultures like Notre Dame does, and they do it in such an honest and trust-building way,” she said. “I’m grateful to the Ansari Institute and the Keough School for this, and for being a part of it.