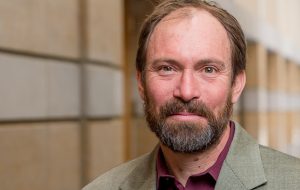 Ted Beatty associate dean for academic affairs at the Keough School of Global Affairs at the University of Notre Dame.

Beatty teaches undergraduate and doctoral courses on the history of Mexico and Latin America and comparative economic history.

A professor of history at Notre Dame, Beatty specializes in economic development in Latin America, especially Mexico. He has examined the role of institutions in economic development, the intellectual and material bases of policy formation, and the history of technological change. From 2007 to 2009, Beatty served as interim director of the Keough School’s Kellogg Institute for International Studies, where he is a faculty fellow. He holds a PhD from Stanford University.

Beatty is the author of Institutions and Investment: The Political Basis of Industrialization in Mexico before 1911 (Stanford University Press, 2001) and Technology and the Search for Progress in Modern Mexico (University of California Press, 2015), winner of the Friedrich Katz Prize for best book on Latin America and the Caribbean from the American Historical Society.

Beatty has received research support from the National Science Foundation, the Instituto de Iberoamérica at the Universidad de Salamanca, and the Kellogg Institute for International Studies. Beatty is currently working on a new project that examines changes in consumption patterns in Mexico, ca. 1850-1930, as well as a study of natural resource constraints to technology adoption.