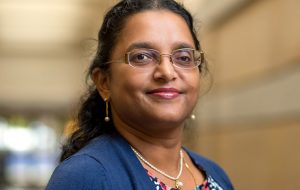 Areas of expertise: Development economics and political economy, with emphasis on property rights and the distribution of political power

Lakshmi Iyer is a development economist whose research examines many dimensions of the distribution of political power within emerging market countries, including the legacy of colonial rule, the division of authority between politicians and bureaucrats, and the determinants of conflict. She holds a joint appointment in the Department of Economics and the Keough School of Global Affairs.

She is currently working on several projects related to the determinants and consequences of women’s political participation.

She also has studied historical and current property rights institutions in several developing countries including India, Vietnam, China and the Philippines.

Prior to coming to Notre Dame, Iyer was a faculty member at the Harvard Business School, where she authored numerous case studies on institutions, macroeconomics, and economic policy. She has published widely in leading economics journals.

Iyer earned her Ph.D. from the Massachusetts Institute of Technology (MIT) and her bachelor’s and master’s degrees from the Indian Statistical Institute.

Video: Economist Lakshmi Iyer on the determinants and consequences of women’s political participation