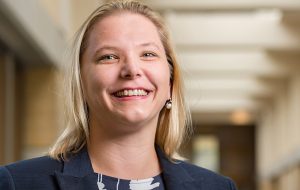 Melinda (Mindy) Fountain leads the coordination and enhancement of professional development and career planning for master of global affairs students at the Keough School of Global Affairs. She connects students with resources across campus and beyond, in one-and-one and group settings.

Fountain supports select Keough School courses, especially with technical, organizational, and professional development aspects. She also drafts documents of record for the Keough School, capturing discussions and decisions of governing entities for the dean. In addition, she executes special projects to facilitate the development of the Keough School.

Before coming to Notre Dame, Fountain served for more than a decade as a diplomat in the United States Foreign Service. As part of the US delegation to the 60th UN General Assembly, Fountain represented the United States on social, humanitarian, and cultural issues. She has served at US embassies in Poland, the Republic of Georgia, and Albania, in roles ranging from protecting American citizens to policy work on refugees and displaced persons, human trafficking, military and security issues. In Washington, Fountain worked as culture officer in the Office of UNESCO Affairs and as a policy advisor to Secretary of State Hillary Clinton’s Senior Advisor for Civil Society and Emerging Democracies.

Prior to joining the State Department, Fountain worked for two years at Indiana University in the Office of Overseas Study as a study abroad adviser. She advised students on choosing, preparing for, and integrating studies overseas into their academic programs and broader career plans.

Originally from Indiana, Fountain holds a BA in political science, a minor in French, a certificate in Polish and Central European Studies and a concentration in Judaic Studies from the University of Rochester in Rochester, New York. She holds an MA in European studies from the Jagiellonian University in Krakow, Poland. She has studied in Poland, Israel, and France, and she speaks French, Polish, Georgian, and Albanian.