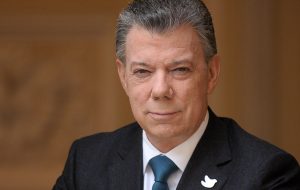 Juan Manuel Santos was the President of Colombia from 2010 to 2018. During his time in office, the historic Colombian Peace Agreement was signed on November 24, 2016, and is celebrated as a major turning point in ending the country’s 52-year armed conflict.

Santos was the sole recipient of the Nobel Peace Prize in 2016 for ending the longest armed conflict with the oldest guerrilla in the Western Hemisphere. He also is the recipient of the Lamp of Peace from the Sacred Convent of Assisi in Italy, which honors those working to promote peace and harmony, and the Tipperary International Peace Award in Ireland for his efforts to bring peace to his country and the region.

For his aggressive environmental policies to protect his country’s biodiversity and fight climate change, Santos was awarded the Royal Botanic Gardens Kew International Medal and the Wildlife Conservation Society Theodore Roosevelt Award for Conservation Leadership. In addition, the National Geographic Society honored him for his unwavering commitment to conservation.

Before serving as president, Santos served as Minister of Foreign Trade and was elected to the Colombian Congress as the Presidential Designate (similar to the role of vice president in the US). He also served as minister of finance and minister of defense. Prior to serving in government roles, Santos was a deputy publisher and journalist with the Colombian publication El Tiempo. He won the King of Spain Prize for Journalism for a series of articles looking at corruption within the Sandinista Revolution in Nicaragua.

Santos is a graduate of the Naval Academy in Cartagena. He holds a Business and Economics degree from the University of Kansas and also conducted post-graduate studies at the London School of Economics, the Fletcher School of Law and Diplomacy at Tufts University, and as a Fulbright Fellow at Harvard University.