The Madrasa Discourses project, developed at Notre Dame’s Keough School of Global Affairs, focuses on recent graduates of madrasas—Muslim educational institutions—in India and Pakistan. (Some participants pictured above.) Funded by the Templeton Foundation, the project equips these newly minted scholars with tools to engage challenges to traditional Islamic thought posed by new developments in the sciences and humanities. 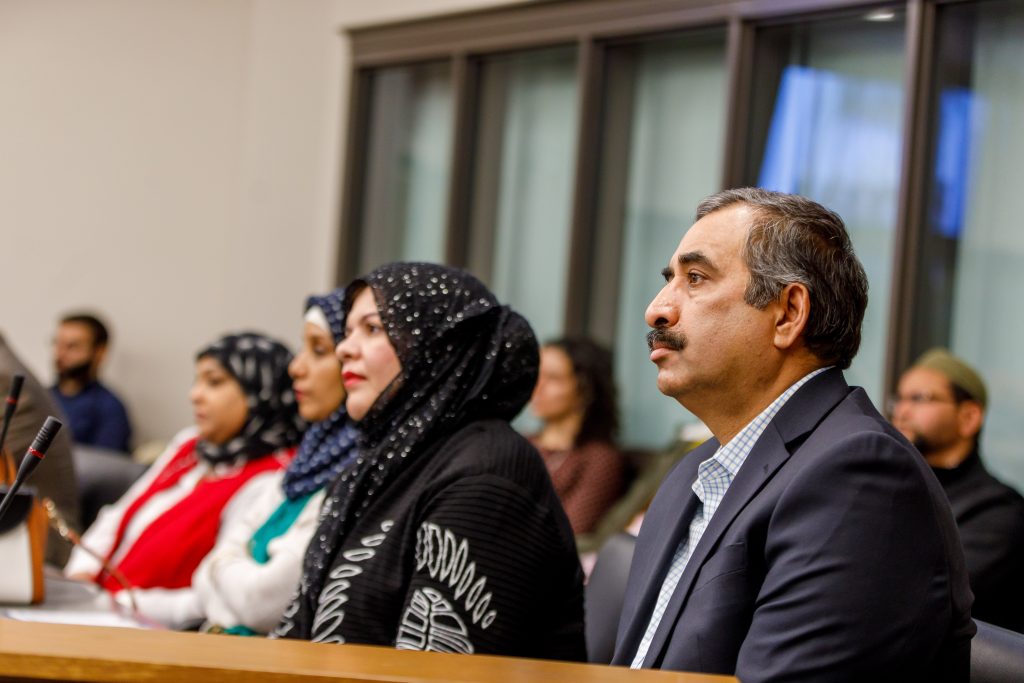 A recent event at the Keough School introduced a new audience to the Madrasa Discourses:  Some 50 local residents, most of them from the Islamic Society of Michiana, which serves northwest Indiana and southwest Michigan, came to Jenkins Nanovic Halls on Notre Dame’s campus to learn about the project. 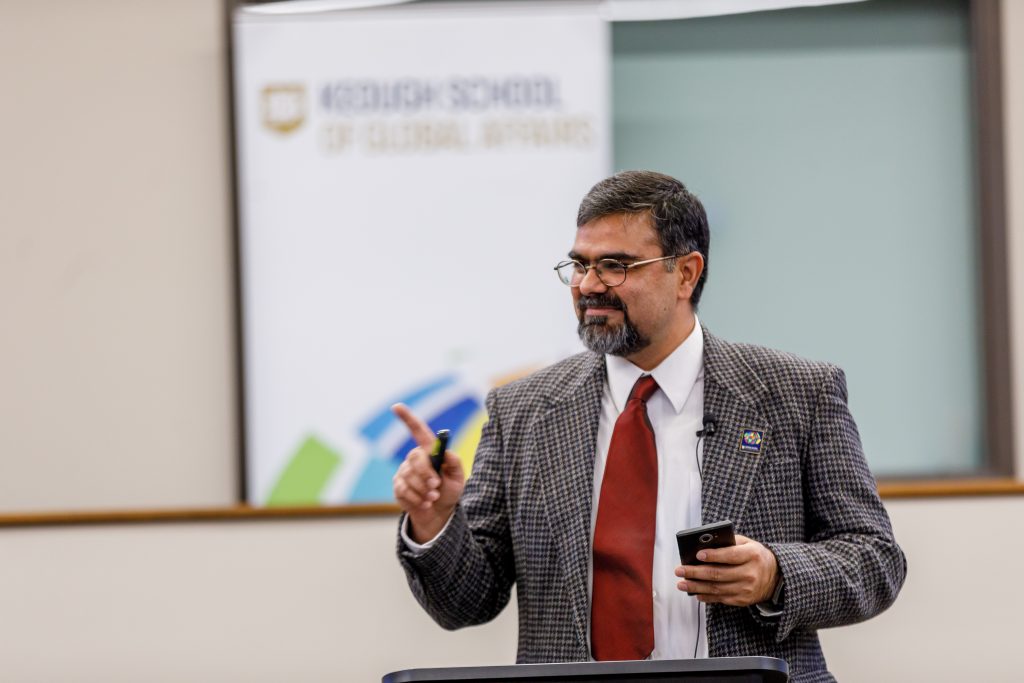 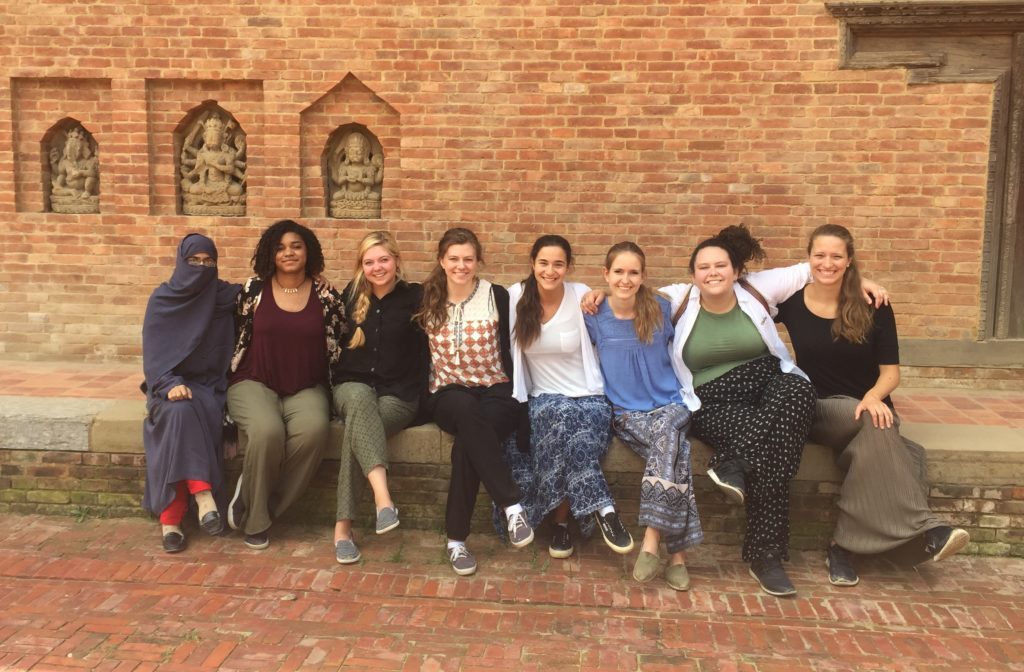 Launched in 2017, Madrasa Discourses invites madrasa-educated scholars to work closely with these experts on Islamic thought for three years. Scholars also interact regularly with Notre Dame students in weekly videoconference dialogues and at intensive courses in Nepal, including one upcoming in July 2018. 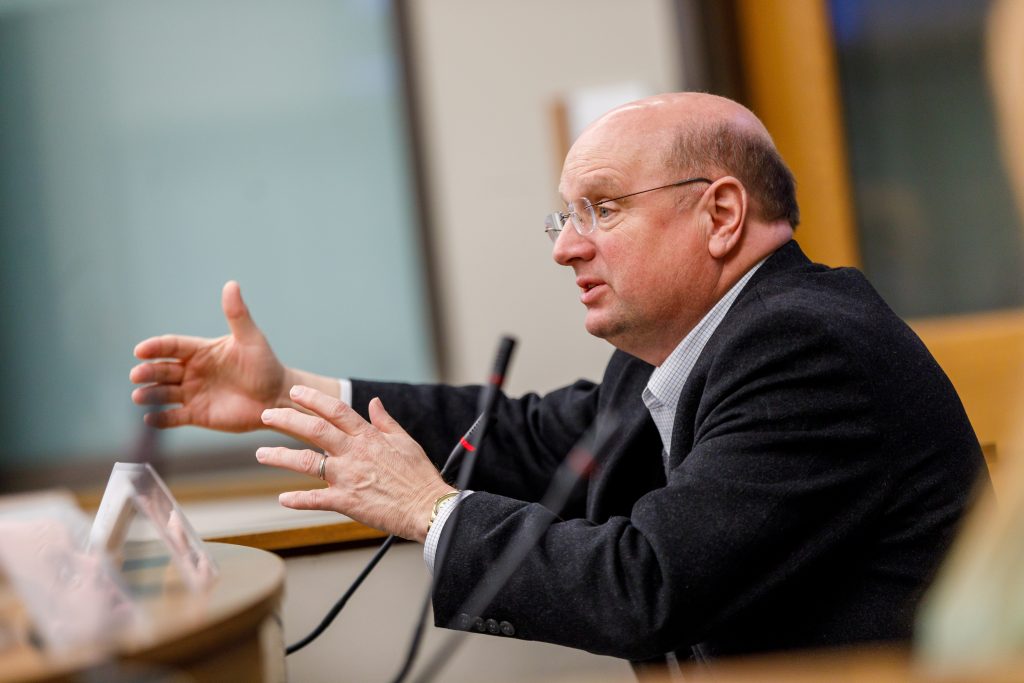 Marilyn Keough Dean Scott Appleby shared his experience teaching at a 2017 summer session in Nepal. Appleby spoke highly of the madrasa scholars and of their conversations that often lasted deep into the night. “It was a privilege and a lifetime experience,” he said. 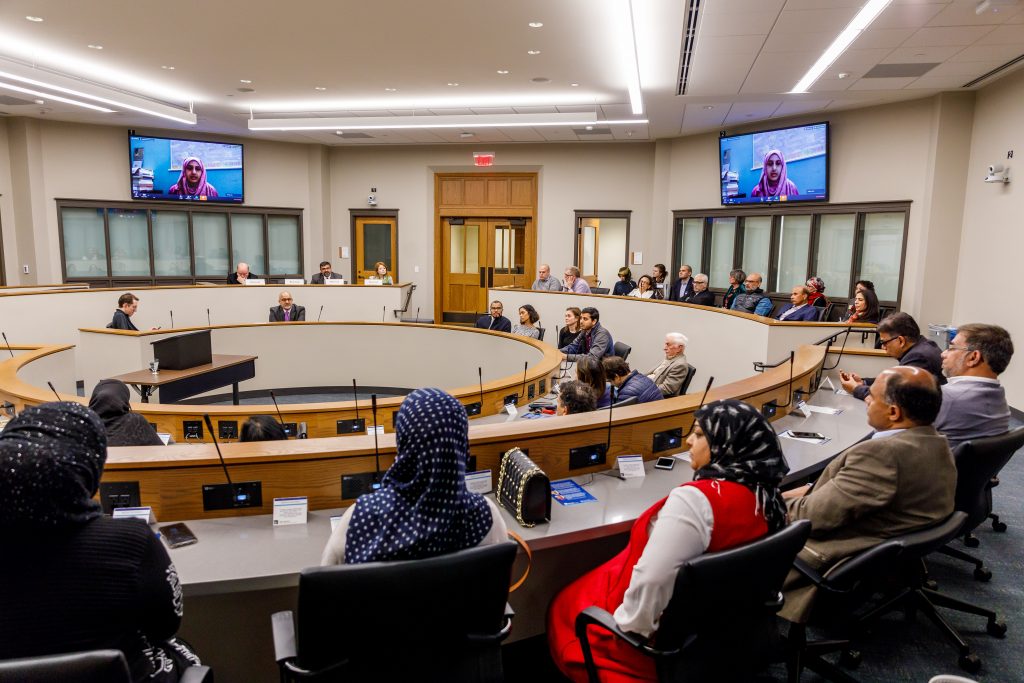 Community members heard from madrasa participants in India and Pakistan through videoconferencing. Several scholars said the program had changed their lives. “It is one of those rare opportunities when we can rethink our tradition,” one woman from India said. “Theology is about thinking—thinking without barriers and in a shared space.” 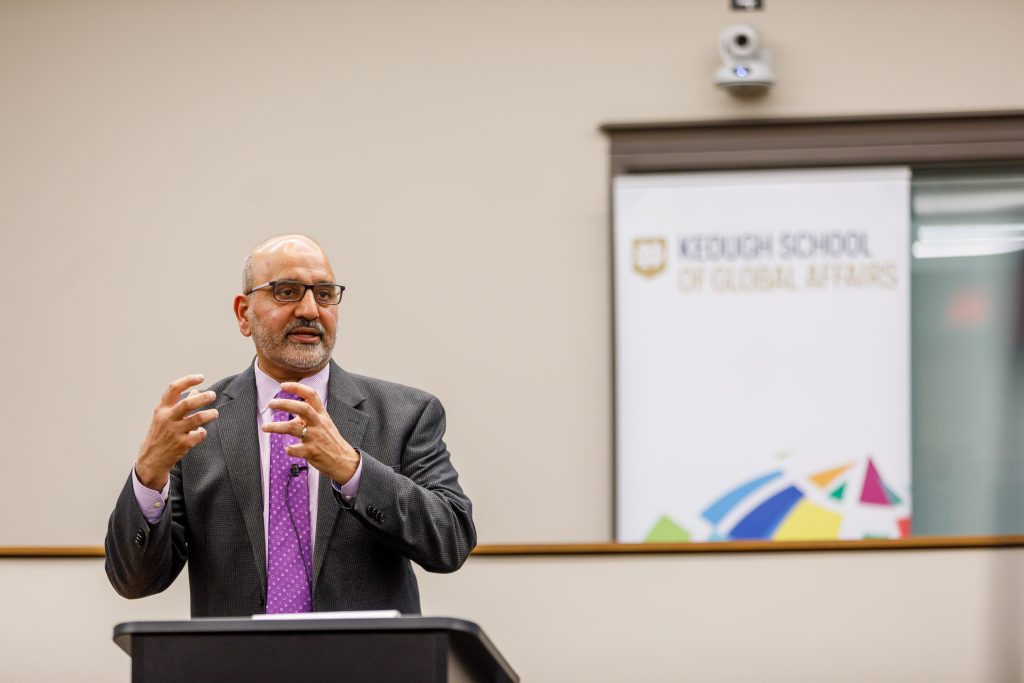 Professor of Islamic Studies Ebrahim Moosa, himself a madrasa graduate, said it is no small thing for these scholars to participate. “They’re extremely courageous,” he said. “They face questions on a daily basis from their peers and others.” Especially, he added, because the program was developed at a Catholic university in the United States. 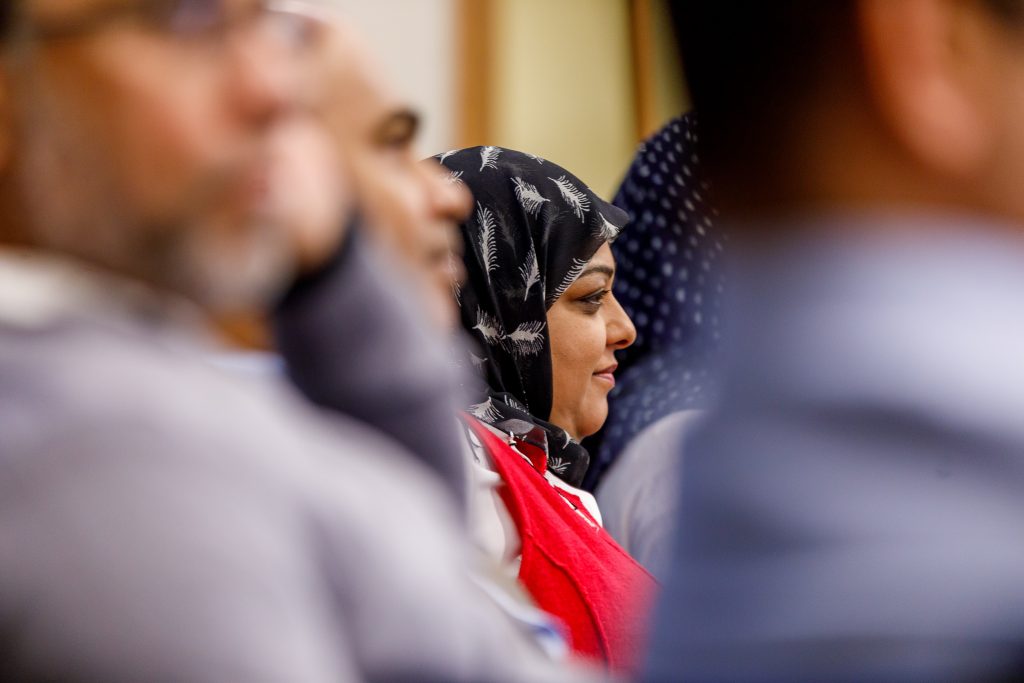 “It was really eye-opening to see the interaction,” said community member Rabia Yasmin Shariff. “As an American, I didn’t realize people in eastern madrasas would be open to different thought processes and ideas. I thought they might be more entrenched in their ideology. This project is very impressive in bringing people together.” 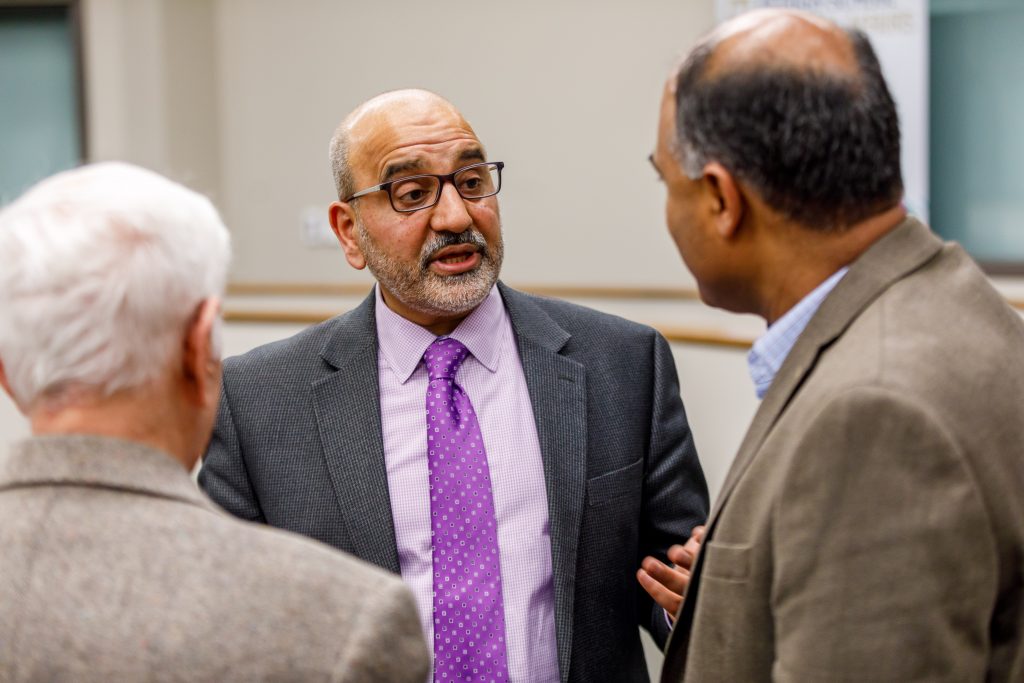 “This was an opportunity to bring the university to the community and give them some idea about the work we do on the study of Islam and global outreach in religion,” Moosa said. “It’s our hope that the community explores ways and opportunities to make a contribution to the life of the university and this program.” 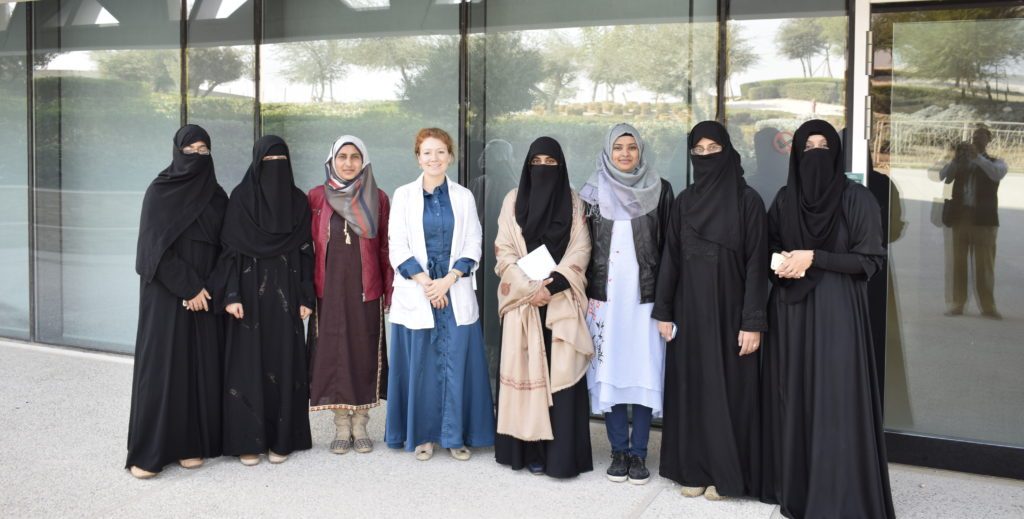 The Madrasa Discourses project is a part of the Contending Modernities research initiative at the Kroc Institute for International Peace Studies, an integral part of the Keough School.