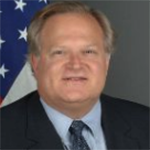 President of Refugees International since June 2017, Schwartz has had a three-decade career focused on humanitarian and human rights issues. Between 2009 and 2011, he served as US Assistant Secretary of State for Population, Refugees, and Migration. As Assistant Secretary, he was credited with strengthening the State Department’s humanitarian advocacy around the world, initiating and implementing critical enhancements to the US refugee resettlement program and raising the profile of global migration issues in US foreign policy. He was the senior human rights and humanitarian official at the National Security Council during the Clinton administration and served as the UN Deputy Special Envoy for Tsunami Recovery after the 2004 Asian Tsunami. He also serves as Washington Director of Asia Watch (now the Asia Division of Human Rights Watch) and Staff Consultant to the House of Representatives Foreign Affairs Subcommittee on Asian and Pacific Affairs, among other positions in the US government, at the UN and in the non-profit sector. Just prior to arriving at Refugees International, Eric served a six-year term as Dean of the Hubert H. Humphrey School of Public Affairs at the University of Minnesota. During much of that period, he also served on the US Commission on International Religious Freedom and, ultimately, as the Commission’s vice chair. He holds a law degree from New York University School of Law, a Master of Public Affairs degree from Princeton University’s Woodrow Wilson School, and a Bachelor of Arts degree with honors from the State University of New York at Binghamton.