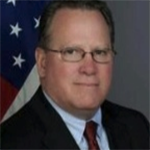 Ambassador Robinson was sworn in as the Assistant Secretary for the Bureau of Conflict and Stabilization Operations and Coordinator for Reconstruction and Stabilization on January 4, 2016. He is a career member of the Foreign Service, class of Minister-Counselor. Throughout his Foreign Service career, Ambassador Robinson has worked in conflict zones and unstable environments, specializing in refugee and migration issues.

Previously, Ambassador Robinson served as the Principal Deputy High Representative in Bosnia and Herzegovina where he was responsible for implementing the Dayton Peace Agreement. Prior to that, he was the Assistant Chief of Mission at the United States Embassy in Kabul, Afghanistan from 2013 to 2014, the Principal Deputy Assistant Secretary of State and the Deputy Assistant Secretary of State in the Bureau of Population, Refugees and Migration from 2009 to 2013, and the Special Coordinator for Venezuela in the Bureau of Western Hemisphere Affairs from 2008 to 2009. Ambassador Robinson also served as the United States Ambassador to Guyana from 2006 to 2008, as Deputy Chief of Mission in the United States Embassy in La Paz, Bolivia and in Asuncion, Paraguay at different times. Earlier he had assignments in posts in El Salvador, the Dominican Republic, and Iceland. Ambassador Robinson received a B.A. from the University of Notre Dame, an M.S. from the National War College, and a Master of Divinity from Christ the King Seminary.