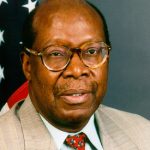 Young began his Foreign Service career in 1967 as a budget and fiscal officer in Antananarivo, Madagascar followed by assignments in 1970 and 1972 as supervisory general services officer in Conakry, Guinea and Nairobi, Kenya; respectively. In 1974, he was transferred to Doha, Qatar to provide administrative support to the newly expanded American embassy and the first American ambassador to that country. While in Qatar, he served as administrative officer and Chargé d’ Affaires, a.i. After Qatar, he was assigned to Bridgetown, Barbados as administrative counselor.

In 1979, Young was assigned to Washington, D.C. as career development officer in the Bureau of Personnel. This was followed by service as executive director for the Office of the Inspector General in 1981.  Young departed Washington in 1983 to be administrative counselor in Amman, Jordan; and in 1985 served at The Hague, the Netherlands. In 1988, he was selected for assignment to the Department of State’s Senior Seminar.

During his Foreign Service career, Young has received numerous awards for performance. Among others, these have included one Meritorious Honor Award, and two Group Honor Awards, and a Presidential Rank Award in 2004. He was also involved with Operation “Sharp Edge,” which was responsible for US support and evacuation efforts during the Liberian war. In addition, the Sierra Leone mission received a Superior Group Award for its assistance in evacuating US citizens following the coup in Freetown in April 1992. While in Sierra Leone, Ambassador Young’s embassy led the way among foreign missions in providing humanitarian assistance to thousands of Liberian refugees. He also assisted large numbers of internally displaced persons when the Liberian war spilled over into Sierra Leone.

Prior to joining the Foreign Service, Ambassador Young was the recipient of a fellowship to the Fels Institute of State and Local Government at the University of Pennsylvania. In 1990, he was selected by the Philadelphia School Board for the Obermayer Award presented annually to an outstanding graduate of the public school system.