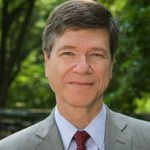 Professor Sachs is widely considered to be one of the world’s leading experts on economic development and the fight against poverty. His work on ending poverty, promoting economic growth, fighting hunger and disease, and promoting sustainable environmental practices, has taken him to more than 125 countries with more than 90 percent of the world’s population. For more than a quarter century he has advised dozens of heads of state and governments on economic strategy, in the Americas, Europe, Asia, Africa, and the Middle East

Prior to joining Columbia, Sachs spent over twenty years at Harvard University, most recently as Director of the Center for International Development and the Galen L. Stone Professor of International Trade. A native of Detroit, Michigan, Sachs received his BA, MA, and PhD degrees at Harvard.